Sufi Teacher Taner Ansari, head of the Ansari Tariqa (of the Qadiri Rifai Tariqa), and  his wife, Sufi Teacher Muzeyyen Ansari returned to Australia in March-April 2016.

We were blessed to have a second visit from the Sufi Teachers in just over a year! It was a wonderful and valuable experience for all of us involved in our Sufi community. The visit  again included a combination of healings, events and private time with Shaykh Taner and Shaykha Ansari.

A Public Event, including a talk by Shaykh Taner and Zikr (Ceremony of Rememberance) was held at the Reg Byrne Community Centre Meeting Room, on  28th March

Shaykh Taner held a well-attended talk and Ceremony of Remembrance (Zikr) at The New Church at Roseville in Sydney, and a talk at North Carlton in Melbourne. Shaykh also performed a number of sufi healings on students of the Tariqa as well as visitors.

In August/September in Melbourne’s North Carlton we held Intro to Sufism events, for those who have heard just a little about Sufism over the years, or have wanted to find out more about Sufism but never had the time or opportunity. 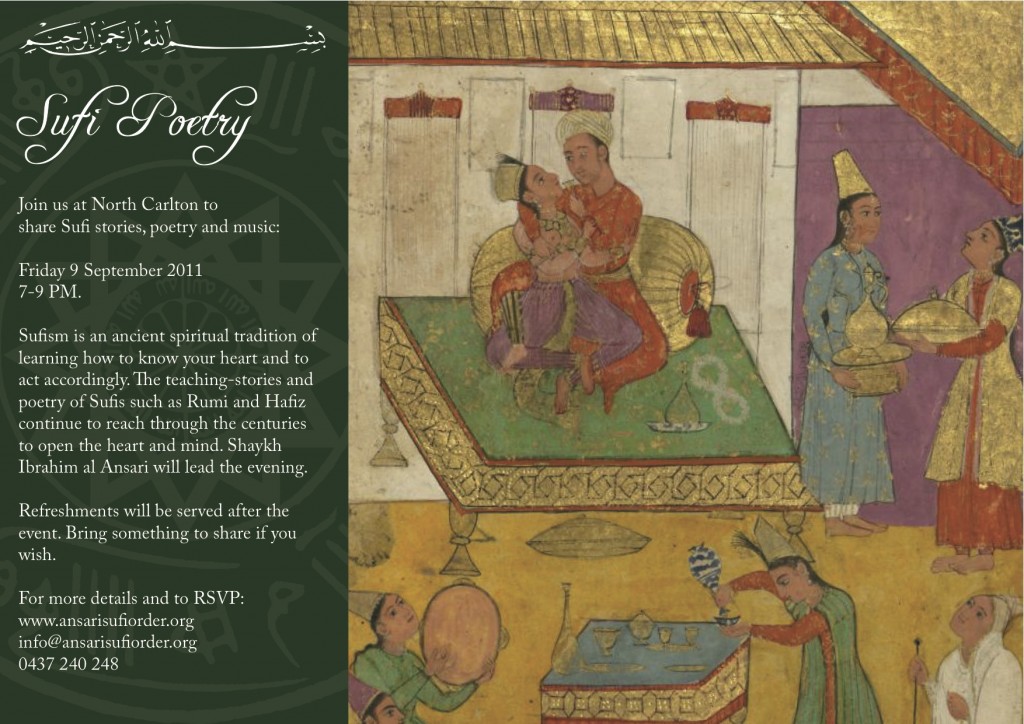 A good turnout came to participate in our night of Sufi Poetry on Friday night, 9 September 7-9 PM. We learned about famous Sufi poets and story-tellers;Rumi, Hafiz and Nasrudin.

Shaykh Ibrahim also led a weekend Workshop, Living Sufism – Getting Out of the Way on 10-11 September. Workshop attendees learned Sufi practices that can be applied to a modern daily life.

Shaykh Ibrahim gave a concert of music based on Sufi concepts, together with readings from Sufi poets Rumi and Hafiz.