A dervish tries to be aware of Allah at all times, in all situations. This is called Remembrance – Zikr. Zikr is done internally and externally. In Sufism this is also done individually and in a group ceremony. A Zikr is a Sufi ritual where the names of Allah are chanted, with Ilahis – songs about Allah and the prophet Mohammed (pbuh), and the founders of the order, and other prophets. A sohbet is a more informal social gathering where seekers come to discuss Allah and the teachings of the Tariqat– the school of sufism. By continually repeating the names of Allah, we are constantly reminded that we are witnessing a miraculous event that we have been invited to be a part of – Life. By bringing into our awareness the beautiful and compassionate aspects of Allah, we partake of these natures, just as if we were to walk in a garden of roses, our clothes and hair would also be imbedded with this sweet smell. However if we were to walk through stables or pig sties, we would leave with that odor upon us. Fortunately, we have a choice. During Mohammed’s life, Abu Bakr (1st Khalifa) and Ali (4th Khalifa) established zikrs. 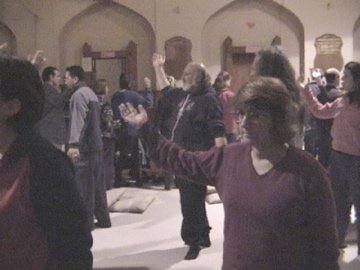 Or another way to look at it:

Zikr is a ritual of remembrance. A ritual is a combination lock. By performing the same movements, words, chants and intention as others have traditionally done in the past, we unlock a gateway to a timeless place that is inhabited by all the others who have performed and will perform the same ceremony throughout time.
Through that gateway we find all the Sufi shaykhs, teachers, prophets, and angels who may easily manifest themselves because our intention is to praise Allah, and our ceremony is a clear, clean and beautiful opening for them and for learning and unity to take place. Zikr is a uniting of our brothers and sisters of the Tariqat. It binds us in a timeless way in praising Allah. Imagine, for example, that we are with Mohammed, Peace be upon him, and are in a state of Remembrance guided by him.
Zikr is also what every living thing is doing, including the trees, the rocks, the wind, the angels.
It is also like a beacon of light that radiates in all directions for the good of humanity. It penetrates the darkness of this world like nothing else can. It is a uniting of hearts and minds, and as we chant Allah’s powerful names, those aspects of Allah are brought into the circle of Zikr. At the heart of the world is a thirst for Allah. Zikr is the pure water that satisfies and feeds a soul-starved planet.